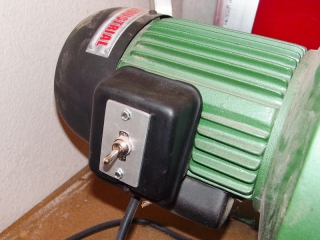 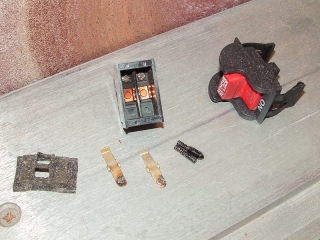 Quite awhile back I purchased a Grizzly G7297 12″ disk sander/grinder. It is one of the most used power tools in the shop. Sometime I just have to grind something off flat or square and this is a fast and accurate way to do it.

The switch is apparently the weakest part in the machine. It stuck in the always on position. As you can see the points are badly burned. The concept was good as it is a double pole single throw (DPST) switch. Both power and ground are broken when switching off. But not good when they weld both sets of points to their mate.

My assumption is this is the same switch used for 220 volt A/C models.

The switch is mostly plastic and the toggle has a plastic part that can be pulled out to supposedly lock-out the switch from functioning. I never used that function and I hazard an assumption that almost no one else does either.

I saw no good reason to use an OEM (Original Equipment Manufacturer) switch as a replacement. I could have ordered a DPST toggle but I had a 20 amp single pole on hand. My shop is wired correctly for 120VAC and the power cord has a safety ground so no real need for a double pole switch. I wired my switch to break the hot side.

I had to fabricate a plate to cove the huge square hole that was in the junction box cover for the original switch. Not much of a task for a machine shop.