I operate three PC type computers in my workshop and each controls a separate CNC machine. I have two Taig CNC mills and a home brew (HB2) CNC gantry router. Two of the computers are refurbished., small form factor size. I paid no more than $100 for each of them. One is an HP Compaq and the other is labeled a Compaq. Their styles are different. The third is very similar but larger bare bones built up. Probably $250 invested in it.

None of them have great internal cooling as they were designed to operate in conditioned spaces. My shop operates at outdoor temperature. It’s been running 95 degrees in there for the last two weeks. Outside it has been very near 100.

The larger case unit running the HB2 has stopped suddenly twice in the middle of a long run. It ruined one piece and almost ruined the re-run second.  It is not going to be put back into service again in this hot weather.

The HP-Compaq computer is a sweet little machine, or at least it was. I just let it upgrade from Windows 7 pro to Windows 10. I use it with a smooth stepper so I don’t have to be concerned about pulse timing. The upgrade took many hours of loading and saving files. It converted just fine and MACH3 and the Smooth Stepper were performing well with Win10. 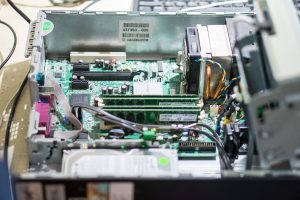 I left it on for a day with it doing nothing but staying on the network. I wanted to see if WIN 10 was going to do any self-updating since the install. When I came back to it the computer was dead. There is a single blinking LED on the motherboard constantly flashing at about 1 Hz with a slight audible click.

I did a lot of investigation and it appears the Power Supply has become nearly powerless. It is making 5 volts and something around 4 volts but there is nothing higher. It could be the shop heat was too much for it. None of the internal fans will run and it doesn’t even think about doing a boot.

I ordered another refurbished $100 computer (not the same brand, it’s a micro format Dell desktop.) because at that price I probably can’t even purchase repair parts. It comes with Win 10 installed, a keyboard and a mouse. Perfect system for CNC control. 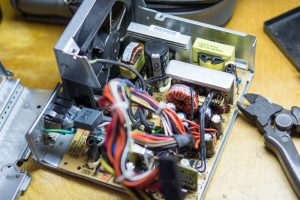 Actually, I did find a rebuilt PS online for $25.00 free shipping from a company called Server Supply. So maybe I can get the little PC back into operation. BTW a new PS was $136.00 dollars.

So it looks like CNCing will be off line until I get a cooler day, like 80 degrees. My next shop if I ever get one will be air conditioned! Ha!

Search Key Word
Categories
All Pages
Recent Posts
Associated Sites
Recommended Links
Log In
NOTE: Log in is for admin and members only, not required to post comments.
90 spam blocked by Akismet