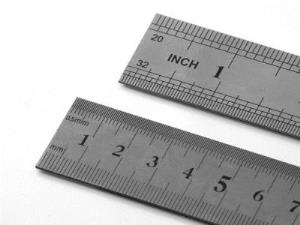 I was in grade school in the 1950’s. It was way back then at least as I can remember that there was a big deal made about using the metric system. It was as if the U.S. (English, S.A.,E, etc.) measuring system of feet and inches (and all the rest) was under attack by the Metric system used in Europe and/or the “rest” of the world. It was the world of science and some engineering that was promoting this new “cause”.

As a “kid” what did I know. But I did get the impression that the USA was not going to change without a fight. It was like a foreign invasion, The emphasis was how to CONVERT from one measurement to the other. Awful conversions factors are required and it really was a math test.

I always thought it was stupid and awkward to do the conversions. I think it just made teachers feel good to have something in a math application they could grade (measure) for accuracy. Hmmm… Are grades in metric or English? How do you convert? Ha!

So we grew up dealing with both systems in grade school and awkwardly converting. It was like we had to preserve our “native” language. In reality, the total metric system actually has a lot going for it, but don’t say that too loudly.

Later in my life many published papers and drawings, where measurement are used, would group both measurements together. Let’s see that’s about 2 inches (51mm). That’s still done today. Most everything in commerce has both systems used in marketing as we are in a world wide economy. A rather clumsy accommodation, not likely to change soon.

Measurements and math are a form of language. In the real world, a person fluent in several languages actually thinks in… END_OF_DOCUMENT_TOKEN_TO_BE_REPLACED

Resting on an Obsession 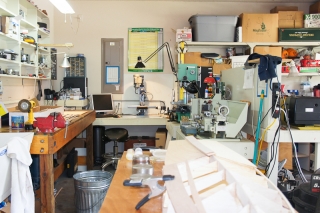 I got myself into a binge improving my websites. I have to admit that web publishing and doing it well has become a personal obsession as big as working in my shop on “hardware” projects.

I suspect that creative work is never finished as almost any design engineer, graphic artist or programmer will admit they usually come to a stopping point rather than a finish. There is always that one more little tweak that can be added. At least I find that is true for me. What it becomes is a point of diminishing return and a decision is made that the mission (project) has been accomplished. There is no obsession to keep going.

I think I am at that stopping point in updating my blogs and website displays. Well, maybe it is more of a resting point. I am satisfied with design at the moment. I hope that for my sake it is a rather long rest. Ha! Now I can just need to train myself to just add content material and stop playing with design of the box.

There is an aura of obsessive perfection about a machine shop and the people who enjoy machining. It stems from the general knowledge we work in the realm of one thousandths of an inch (or 0.0254mm). Not so well known is we sometimes get into one ten-thousandths of an inch, thankfully not often.

Some machinists, especially the newer untrained hobbyist types have an overwhelming creative desire or obsession for dimensional (± 0.000) precision. That is not the meaning of my THMS slogan, “One Perfect Part at a Time”.

I know there are times to be critical of exact dimension but that most of the time there is an important thing called tolerance. Good design includes and specifies tolerance.… END_OF_DOCUMENT_TOKEN_TO_BE_REPLACED

A local person here in Frisco asked if I could duplicate this part (the black one). I don’t usually like to take on outside projects as I have enough of my own. This part looked interesting. It is part of a tripod bracket for an expensive, but what the owner called a “toy” gun. Actually is is a very sophisticated collector item.

As can be seen in the photo the bracket had the tab broken off. It is a very nice injection molded aluminum casting but the crystallization left it vulnerable to breaking where it did.

I was going to make a duplicate by manual milling. That’s the rotary table setup in an earlier post. I changed my mind and decided to do it with CNC milling.

I had to first very carefully measure the part in every detail then make a 3D drawing in Rhinoceros (Rhino) You can see the screen capture and a couple of output pictures.

I converted the drawing to two G-Code files with RhinoCAD, one for top and one for bottom.

I did a test run in oak then made the one in aluminum. I used my Taig CNC mill running mist cooling. Overall size of the part is rather small, about 1.5″ x 1.5″ x 3/8″

I’m not setup for doing anodizing and I have never done any. I have studied the process and it can be done in the home shop. The new part really needs to be anodized like the original, but that is not my “thing” right now. That’s all I need is another skill to master. 🙂

I have discovered I might have all that I need to die happily in my machine shop. Well, almost. It’s that “almost” that will keep me alive in the long run. Just one more tool then I will die happy. It may be the “just one more tool” that keeps me alive forever. What do vampires know about immortality? HA! All that awful yucky blood and stuff…

It’s bad enough when I nick my finger.  I have a cute little scar on the back of my left hand middle finger where earlier this year I let a 10,000 rpm end mill remove some flesh.  CSI (Crime Scene Investigators) would have enjoyed figuring out what happened at the scene of the accident from reading the resulting blood splatter. <’ulp…>

Ninety nine point nine percent of the time I practice safe workshop.  That’s ok as long as the last tenth remains minor. The vampires can stay in their dark places, thank you.

I am still in lust for the smaller projects. I had a discussion with a caller about machine tool size. I admitted I liked some of the larger machine tools, but I have no projects that can justify them. Mostly I cannot justify the very high cost of the tools or the materials. I’m just in my comfort zone where I am.

I have been doing some recent machining so small I have to wear one of those dual lens magnifying hoods to see the work.  When I push it up or take it off, I always feel amazed at how tiny the work is that I was doing. I think it is a lot of fun doing miniature machining.

Do You Need The Balls?

There is a common conception in the amateur machinist world that ball or roller bearings are always the preferred selection to bushing or solid surface bearings. That is not always the case. Machine engineers, of all people, should know it always depends on the application. There are many applications where ball bearings are contra indicated, meaning they should not be used. Some of those reason can be as simple as cost over performance, excessive noise or the possibility of bearing contamination in harsh environments.

The primary benefit of using a ball bearing over other types is the greatly reduced drag due to its small rolling surface contact point. Their use is preferred when low friction is a high priority and other factors like low noise is not. They will reduce power requirements, help reduce friction heat and provide long periods of operation. If they are properly sealed, they will reduce maintenance. The best, high quality ball bearings can reduce run out and take thrust loads. These are worthy goals but sometimes are higher goals than necessary.

To quickly get to my point, I’ll examine the bearing needs for the lead screws on all the axis of a small manual mini lathe. First, do radial ball bearings “increase machining (position) accuracy” on any of the calibrated axis including the Z axis main feed screw over a bushing type bearing? The answer is an absolutely no.

This is because the linear slide position accuracy is a function of axial (not radial) screw loads affecting the amount of compression/expansion of the lead screw, drive nut thread engagement, drive nut mounting rigidity, thrust surface material and screw shaft bearing end play. This as combined is commonly called backlash. Minor drive screw side play (run out) is not a factor.